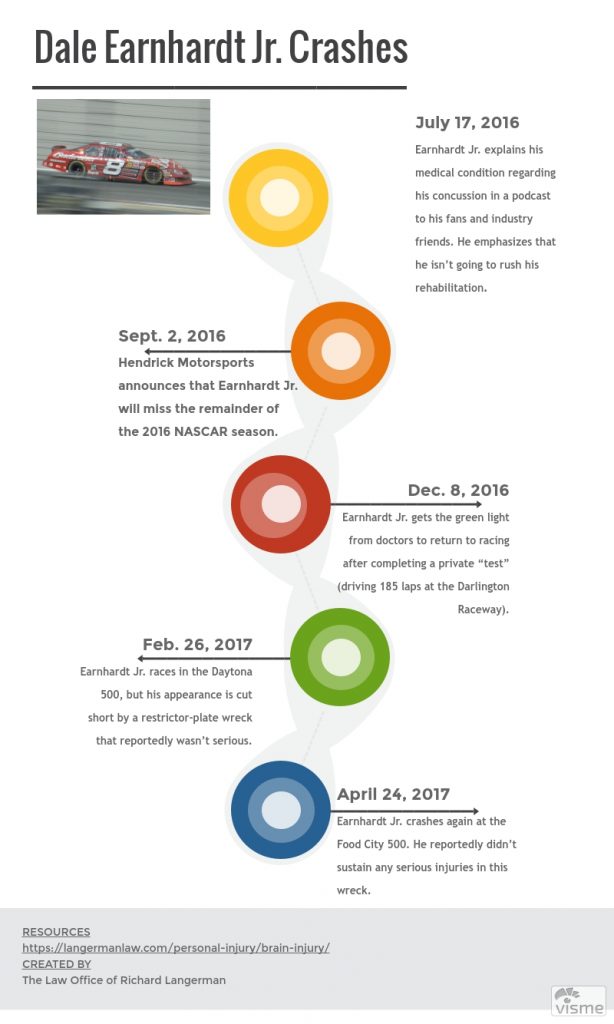 The ‘Pied Piper’ of Daytona, Dale Earnhardt Jr., has decided to retire from NASCAR racing at the end of the 2017 season. Some think he’s cutting his career short. Others wonder if a series of crashes and injuries over the past year or so may be to blame.

Timeline of Events Leading Up to Dale Earnhardt Jr.’s Decision to Retire

Here’s look at the significant events over the past year that have led up to Junior’s retirement announcement:

To say I’m disappointed doesn’t begin to describe how I feel, but I know this is the right thing for my long-term health and career. I’m 100 percent focused on my recovery, and I will continue to follow everything the doctors tell me.

This timeline seems to suggest that concussion-related health issues, possibly coupled with a waning winning streak, played a role in Earnhardt Jr.’s decision to retire.

Here are a few more interesting points to consider:

A Glance Back at Earnhardt Jr.’s Legacy

During my rehabilitation, I was given something that I wasn’t accustomed to, and that was time – time to understand what’s important to me, time to realize the incredible support system I have.

I’ve accomplished way more than I ever dreamed. So I’m good on that front. My heart loves being in the car. I love driving. I enjoy it as much as I ever have. It’s really emotional.

A Word about Concussions & TBIs: How Serious is a Concussion?

Concussions are mild forms of traumatic brain injuries (TBIs). Though concussions can be highly treatable, recent research has indicated that concussions may have:

Complicating this are the facts that concussions can have symptoms that are:

Speaking about concussions, their impacts and how NASCAR specifically addresses this concern, Earnhardt Jr. said (in March 2016):

Concussions are like snowflakes. There are no two concussions that are the same. Each one deals with certain parts of the body and to be able to use that impact test helps you understand how to treat that particular concussion.

I think the protocols and the advances that we have made in trying to protect ourselves are great things. I’m excited about what NASCAR has done. They have really taken this head on. They are talking to the right people. They are talking and involving themselves with the right folks to get the best information to be able to protect the drivers the best way they can. … It will just get better the same way everything else in the sport progresses.