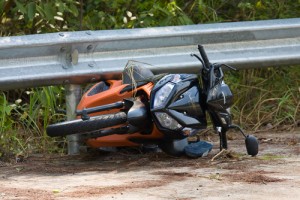 A motorcyclist driving at a high speed on Rio Salado Parkway this morning was killed when he crashed into a vehicle that was making a left-hand turn in front of him.

A motorcyclist driving at a high speed on Rio Salado Parkway this morning was killed when he crashed into a vehicle that was making a left-hand turn in front of him. The motorcyclist, who had not been wearing a helmet at the time of the accident, was thrown from his bike and was ultimately pronounced dead at the scene of the accident when emergency responders were unable to revive him. Although law enforcement officials have stated that they do not believe that the driver of the vehicle, who was not injured in the accident, was intoxicated or otherwise impaired when the accident occurred, they are continuing their investigation to try to uncover whether the driver or the motorcyclist may have acted negligently and, as a result, contributed to the accident.

Should the driver ultimately be found to have been negligent or somehow reckless and this negligence can be linked to causing the accident, the family of the deceased motorcyclist will be entitled to compensation for:

Examples of driver negligence that could form the basis of a car accident wrongful death lawsuit in this case may include:

If you were injured in a car accident or lost a loved one in a wrongful death accident, the Phoenix, AZ auto accident attorneys at the Law Office of Richard Langerman will fight to help you obtain the maximum possible compensation you deserve to cover your pain and suffering, lost wages, and medical bills. We have extensive experience representing clients both inside and outside of the courtroom against both defense attorneys and insurance company agents alike.